It’s that time again — Apple has announced new products, and we’re here to tell you what we think about them.

First off, a bit of caution: on October 25th, Apple will be releasing the next version of macOS, called Monterey (aka 12.0). As usual, if your Mac is eligible for it (most models prior to 2015 are not), we recommend you wait a month or two before installing this, just to make sure there isn’t anything notably wrong with it. If you haven’t yet upgraded to Big Sur (aka 11.6), the current version, now is as good a time as any. Just make sure you have a current Time Machine backup. And, if you are not already on Catalina, you might need to upgrade older software. We can help, so contact us if you need it.

As for iOS 15 for iPhone and iPad, which came out last month — it appears pretty solid, so if you haven’t upgraded, make sure you have a current backup (under Settings > (your name) > iCloud > Backups), and kick off the upgrade under Settings > General > Software Update. 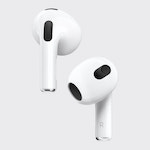 Next, a quick announcement about AirPods: Apple has introduced a third model of AirPods which sits between the traditional AirPods (2nd generation), and AirPods Pro. These are called AirPods (3rd generation). Shapewise, they’re a lot like my beloved AirPods Pro, but without removable eartips or noise cancellation. The traditional 2nd generation model — which I think is still great — remains available at a reduced cost, so the product lineup is now: 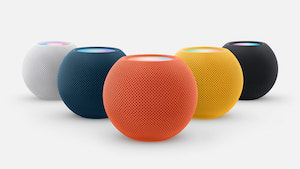 The HomePod mini is now available in colors, and, to go with those, Apple has introduced an odd new $4.99 subscription service which is like Apple Music, but only controllable via Siri. I’ll pass.

Now, a bit of recap: Apple is halfway through what they intend to be a two-year product transition, in which Mac computers are no longer based on Intel processors, and instead on Apple processors of their own design (similar to what’s in iPhones and iPads). For the last year, they’ve been selling both varieties; less expensive Mac models have featured the first Apple processor for Mac computers, called M1, and this has appeared in the MacBook Air, the 24-inch iMac, the entry-level MacBook Pro with two ports, and the entry-level four-port Mac mini. These are all very nearly the same machine with the same capabilities, in different shapes and sizes. And the performance of these first-generation Apple chips has been so good that these less expensive machines are, in many cases, better choices than the more expensive, and soon to be outmoded, Intel-based models Apple has been continuing to sell.

We’ve been advising people not to buy high-end (four-port) MacBook Pro models, and 27-inch iMacs, for this reason — you’re buying, from Apple’s point of view, yesterday’s technology, and their continuing support for these models will likely be as brief as they can get away with. Those models are still fine if you need one right now, and are in fact a good choice if you need to run the Microsoft Windows operating system on your Mac, but otherwise, you want to be buying an Apple processor-based Mac at this point.

Well, for many of us awaiting a high-end MacBook Pro, the day has finally come: Apple has announced 14-inch and 16-inch models. Let’s look.

Performance: This is the raison d’être for these new MacBook Pros. The Apple M1 chips in the previously released machines were already excellent, but Apple has now introduced their souped-up models, called M1 Pro and M1 Max, and each is available in several versions, depending upon how many processing “cores” they have. (These choices supplant what used to be your choice of processor speeds.) Put crudely, choosing your processor for your new MacBook Pro is like choosing how big an engine you want for your car. The more you spend, the faster it goes, most likely at the expense of some battery life.

The M1 Pro processors allow you a maximum of 32 GB of memory; if you want to go to 64 GB, you’ll need an M1 Max. Unusually, you also get your choice of power brick; the chunkiest one (the 96W model) also features “fast charging” which can get your computer back to 50% in 30 minutes, if Apple is to be believed. Some of the M1 Pro configurations and all of the M1 Max configurations demand the larger charger, so that’s what you’ll get.

One thing I’m happy to see is that the 14″ model is finally a first-class citizen in its options; you can get the same processors, and you can, if you don’t mind dropping the coin, go up to 8 TB of storage, just as you can on the 16″ model. This is the first time I can think of that a smaller model can do everything a larger model can.

Apple’s new processors for these new MacBook Pros look like they kick ass, and, eschewing the simplicity of “M1 and done” they offered earlier this year, they are marketing the MacBook Pro to buyers who want to build exactly what they want.

Display: Taking a cue from the iPhone, the screen on the new Macs is edge to edge, with an extremely slim border. That’s pretty sweet, as it keeps the physical computer smaller, but what will take getting used to is an iPhone-style black notch at the top center, housing the webcam, which has been upgraded to 1080p, meaning much improved over previous models. The screen also uses high-contrast mini-LED technology (which Apple calls “Liquid Retina XDR”) like what they use in the iPad Pro 12.9″ model and their $6000 professional external monitor. The display also uses the “ProMotion” technology (up to 120 Hz refresh rate) introduced in the iPhone 13 Pro models for smoother, less flickery screen motion. In other words, this display is poppin’.

Sound: Apple is claiming a “room-filling” six-speaker system for both models. I’ll believe it when I hear it, but sound is already quite good on older 16″ MacBook Pro models, given the physical constraints. The headphone port on the new MacBook Pro models has been upgraded to be compatible with “high impedance” studio quality headphones, for creative road warriors.

Ports: One complaint over the last several years has been that Apple’s laptop models only feature USB-C ports, which are used variously for power, USB devices (like drives, card readers, Ethernet connectors, etc.), video, and Thunderbolt devices — provided you’ve got the right collection of adapters with you. The new models ease some of this pain by bringing back a dedicated magnetic power port, much missed since the 2015 models, called MagSafe 3; an SD card reader; and an HDMI port, so you don’t need a special cable or adapter to go straight into an external monitor, TV, or projector. Three USB-C (aka Thunderbolt 3) ports are also available, and these can still be used for power if you’ve invested in a bunch of power adapters for your previous Mac.

Personally, I would have gladly traded the HDMI port or SD card reader for a traditional USB-A port, but that ship has sailed — you’ll still need a USB-C to USB-A adapter, or a hub, to plug in most USB devices.

Size: The new MacBook Pro models are a little thicker, wider, and heavier than their predecessors, presumably to allow for longer battery life. This is a bit of a turnoff for me, as I have always elected for lightweight Macs. Apple is now moving back in the other direction for their Pro models, with the 14″ weighing 3.5 lbs (as opposed to 3 lbs for the 2016-2021 13″ model or 2.75 lbs for the MacBook Air), and the 16″ weighing 4.7 pounds (as opposed to 4.3 pounds in the 2019 16″ model).

I think this trend is a good thing for those who want a powerful, portable Mac without compromises; but if you like a small computer, then I’d suggest a MacBook Air instead, which in its current incarnation is a perfect general computing laptop.

Keyboard: The widely derided Touch Bar has been banished, being replaced with full-size function keys. (The 13″ MacBook Pro that’s still hanging around does feature the Touch Bar, if you really want one.) Touch ID remains.

Battery: Apple is providing their usual meaningless figures in terms of battery life, claiming wonders you are unlikely to realize. What you get will depend on how you use your computer, and which processor you choose. A safe bet is that the 16″ will last longer than the 14″, because they can just pack more battery in there. Whether or not you can get all-day usage without a charge, as is often possible with the current MacBook Air, remains to be seen, but I’m keeping my expectations in check, considering the greater power demands of the new processors in these Macs.

To quickly review the current lineup of Mac laptops:

If you want one of these new MacBook Pro models, order it now, as they already have a month-long backorder delay. If you have any questions about what to get, give a shout.

To sum up, it looks like Apple has produced some real winners here. I’ll say again what I said a few months ago: with the revolution in Apple producing their own high-performance processors for Macs, which have exceeded everyone’s most optimistic expectations, the “center” of the Mac product line has shifted downwards — even the cheapest machines are more than good enough for everyday computing, and I don’t hesitate to recommend them. The more expensive machines are for specialists, or those who just want a little more oomph. In other words, “Pro” finally means something again.

If you have any questions about Apple’s new computers, let us know!