I got the new MacBook Pro 13-inch, with Touch Bar, and maxed out options, I thought I’d review it for you. It’s my first truly new Mac design in seven years, when I purchased my first MacBook Air 11-inch model, followed by several newer versions of the same. 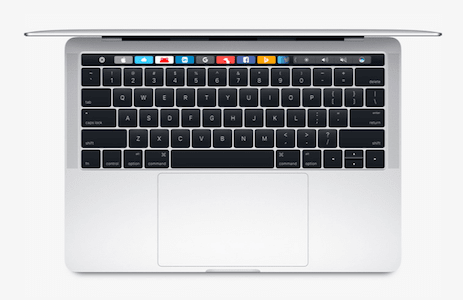 It’s a very nice computer, if very expensive. It’s not an automatic win if you already have a MacBook Pro that you like. But you might want the new model if you wish your MacBook Pro were lighter, or if you wish your MacBook Air 13-inch had a much better display, or you’re unsatisfied with the performance or capacity of the computer you already have.
The display is beautiful. Performance is snappy, but not instantaneous, and not as noticeable an improvement as I was hoping for. The sound is I think the best I’ve ever heard on an Apple laptop. The battery life is better than what I had, but unspectacular. I’m guessing 3-5 hours of real world use. I love that I can’t ever hear the fans.

PORTS
Like the slim MacBook released last year, the new MacBook Pro doesn’t have any familiar ports. Instead, it has four ports with USB-C connectors, which Apple calls “Thunderbolt 3” ports, and that’s it. Unless you never attach a single thing to your computer, you’re going to need at least one USB-C to USB-A adapter in your bag — get one when you order the machine.

USB-C is a universal “superconnector” that replaces all of the Mac’s previous ports: power, USB-A, Thunderbolt, Ethernet, HDMI, FireWire. All of these and more can be had via adapters. It’s a drag, but in a couple of years, when USB-C is widely used on all kinds of devices, it will reduce needing different cables for different things, and it will allow alternatives to expensive Apple-manufactured cables. (Read our last newsletter on USB-C ports for more info.)

If you use a non-Apple external display with your Mac, you’re almost certainly going to need a new cable or adapter (probably USB-C to DVI). You cannot use Apple’s USB-C to Thunderbolt adapter with your existing Mini DisplayPort adapter or cable.

I like that you can attach the power connector to either side of the computer, because you can use any of its four ports. (The model without the Touch Bar, has only two ports, on the left side.) I do miss the MagSafe connector, which prevented the computer from flying if you trip over the power cord.

BACKUP
You really have to take care to back up this computer. The drive where your data is stored is not a separate component, so if the computer conks out, Apple might give you a new one, but your data can’t be pulled off your old one. It’s like an iPad. Neither I nor anyone else will be able to pull the drive out to salvage the data if the computer can’t operate. So definitely get a Time Capsule, and cloud backup such as CrashPlan or BackBlaze, if you don’t have them already.

KEYBOARD
As a touch typist, I can say that the keyboard is really fast and responsive. I like it. It’s also really loud, and sounds sort of like popcorn popping; this bothers a lot of people, though not me. Even though the key “travel” is shallower than previous models, I find it very nice to type on, more so than on the 12-inch MacBook’s keyboard.

TRACKPAD
The trackpad is crazy huge — I don’t fully get the point of it being so large. When I type really fast I find myself occasionally clicking without wanting to, and I had to turn off “tap-to-click” in the System Preferences. The “trick” click on the (actually immobile) trackpad works convincingly, but sounds weirdly hollow and metallic, diminishing its believability. 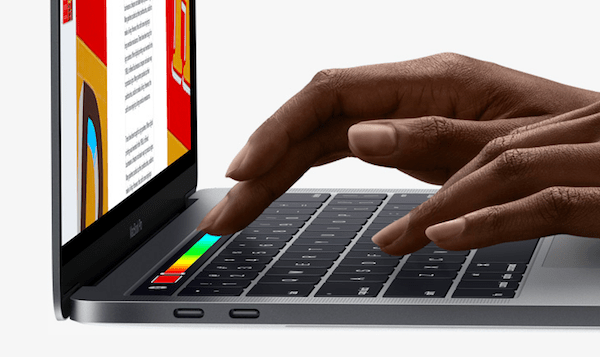 TOUCH BAR
The touch bar is, so far, a novelty. It’s a strip that replaces the function keys above the top row of the keyboard, and different buttons and keys appear there depending on what you’re doing. For example, right now I’m in Pages, and it’s offering me keys for Bold, Italic, etc; in another application they’ll be something different.

I don’t think I’d miss the touch bar if it were gone, but it’s certainly neat looking. I’m hoping some application I use will do something really useful with it. (It does suggest relevant emoticons when I’m chatting, so I guess that’s something, but not really something I need.) I feel like it should have tactile feedback, like the trackpad, and some of its everyday buttons are irritating; to turn down the volume on any other Mac, you just press the volume down key a few times without even looking at it. Now, you have to press the volume button, then slide the volume slider, which appears in a different section of the touch bar. So you have to concentrate more.

The touch bar also features Touch ID, which is pretty great. You can use your fingertip to unlock your computer, instead of typing your administrator password. And 1Password supports it, which is almost enough reason to justify the computer. You can also easily switch between different users with Touch ID.

WARRANTY
This is an expensive computer. You definitely will want to get AppleCare, and look into purchasing with a card that offers extended warranty protection (e.g. Visa Signature or Infinite, MasterCard World or World Elite, American Express).

THE BOTTOM LINE
Compared with a MacBook Air 13-inch, I like this computer much better, and it’s effectively the same size and weight (the footprint is actually a little smaller). Compared with my 11-inch, it was a tougher call — my choice was smaller and lighter, but less powerful (12-inch MacBook), or larger and heavier, and more powerful (13-inch MacBook Pro). I made my choice, and I’m very happy about it.