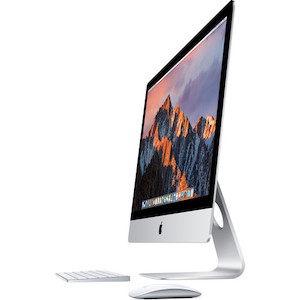 Apple’s a premium brand, and they make almost uniformly excellent products. If you buy something Apple, even if you a minimum configuration, you have the confidence that you’re not getting crap.

Unless you buy an iMac that has a hard drive or Fusion drive–which is the standard option for most of them. To avoid getting one, you usually need to customize the order during check out to instead get a solid state drive. Every other model of Mac has a solid state drive included as the only option. But not the iMac.

Hard drives are about four times cheaper and many times slower than solid state drives for the capacity you get, and I have nothing inherently against them. The problem is that recent Apple operating systems, and especially Mojave (with its requirement for the new APFS file system), are made to work well on SSD’s, without regard for whether they perform well on HD’s.

And they don’t perform well. They perform terribly. Pinwheel city. Even on a brand new Mac. (Apple’s bizarre insistence on using even slower 5400 RPM drives in their 21.5″ models, rather than 7200 RPM model, only compounds the problem.)

Fusion drives are supposed to be a compromise, in which the operating system, applications, and frequent files are stored on a small SSD, while everything else is stored on a much larger HD. Unfortunately, in 2015 Apple, with almost no disclosure anywhere, reduced the SSD size of the SSD model to the point that not even Applications will fit entirely on it, if you have a few large ones. It’s hardly better than a regular hard drive. The 2 TB and 3 TB models have a larger SSD, but if you’ve got the budget for an all SSD model, that’s what I’d overwhelmingly recommend at this point.

So, what is Apple doing? I get that they want to be able to sell a computer with 1-3 TB of storage for a reasonable price. But they’re damaging the brand. I don’t know if the people who make these decisions realize what a dog that machine is, but it’s dreadful. They need to stop selling it in that configuration. I suspect they finally will within a year, when the iMac gets a major refresh, but that would be about four years too late.

If you do have a 2012 or later iMac with a hard drive, your options are to buy a new Mac with all SSD storage, or invest in a Samsung T5 external SSD, and use Carbon Copy Cloner or Time Machine Restore to copy everything to it.

I hope Apple stops selling this inferior configuration of machine–it’s like a Ferrari with no tires.

So What Is a Retina Display?

How long do hard drives last? And what does that mean for the life of your Mac?