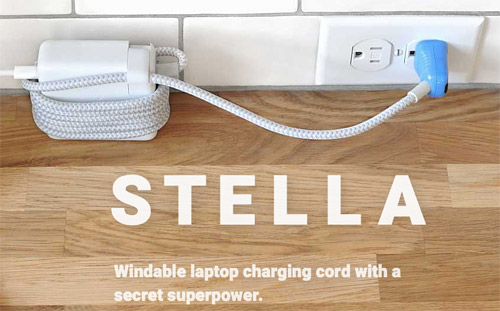 We just found out about a company called Ten One Design that’s making very cool Apple accessories. The two here are specifically for your Apple charging cables.

Stella, pictured above, says it’s a better charging cable for a few reasons. Its woven surface is better than what comes out of the box with a new Mac because it’s more flexible and less prone to breaking. And the plug itself lights up when you put it next to an outlet, so you can plug in more easily! It costs $35 from Ten One Design’s website.

Blockhead, image above, puts your duckhead plug on the side of the brick instead of straight off the back, so it is flatter against the wall and has less of a tendency to fall out. (This one can be used with any of your Apple bricks — iPad, iPhone, or Mac.) Cost is $20.

Or you can buy both Stella and Blockhead for $50.

We haven’t tried these ourselves, so do your due diligence — and let us know if you buy them and like them!