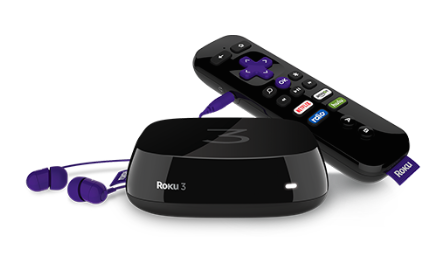 There’s a lot of hype about the new generation Apple TV, and I’ll be taking a closer look at that soon.

However, while I was sitting around waiting for Apple to up their game — the previous Apple TV was certainly long in the tooth — I tried out a Roku, and I love it.

Roku was an early pioneer in providing internet video on TV — they’ve been around a while. A Roku is, in fact, a lot like an Apple TV. It’s a small puck, or stick, that connects to an open HDMI port on your TV, and provides you with content that streams over the internet.

Since Roku doesn’t actually provide their own content, unlike their competitors Apple, Amazon, and Google who all make similar devices, it’s fairly agnostic as to what you watch and how. Its whole reason for being is to provide access to as many internet video sources as possible, which they call “channels.” For many people, that may not really amount to much more than the big players: Netflix, Amazon, Hulu, HBO Go, etc.

However, because Roku has long followed the “app” model that the new Apple TV is introducing only now, their box is open for anyone who wants to make a channel for it, from large companies to a single person. This means that all kinds of specialty niches are available, such as Cafe Noir (for fans of intriguing old movies). Some channels are actually “live” rather than “on demand” like traditional TV channels, such as Bizarre TV, for those of us with a taste for trashy horror movies from our childhood.

Some Roku channels are subscription, some are a la carte, some are ad-supported, some are just free (or included with cable service, if you haven’t cut the cord). There are also private channels, which you can find out about from sources such as RokuGuide.

One notable channel for New Yorkers, and which I use a lot, is Time Warner Cable. Their Roku channel allows you to watch many live cable channels, just as your cable box does, as well as a ton of on-demand content (which is great for those of us with TiVo’s, which don’t support TWC On-Demand). And, in a brand-new pilot program in NYC, Time Warner is offering their Roku channel as an outright replacement for needing a cable box at all. (The future moves quickly.)

Setting up the Roku is easy, once you choose a model. There’s the Roku 1, 2, 3, and 4, plus the Streaming Stick. The Stick ($49) looks like a large flash drive which sticks out of your TV’s HDMI port. The big downside is that you still need to provide it with power, meaning an additional cable, but some TV’s have USB ports, and you can use those rather than plugging a cord into the wall. (The Stick a handy thing for hotels, but don’t forget the remote and power cord, and to take everything when you leave.) As for the other models, even the Roku 1 ($49) is totally adequate, and also supports old TV’s that don’t have HDMI ports. The Roku 2 ($69) is a faster performer, the Roku 3 ($99) offers a remote with a headphone jack and voice search a la Siri, and the Roku 4 ($129) is something most people won’t need today, but may in few years when Ultra High Definition TV’s become commonplace.

If all you want is cheap access to the popular content providers, you might also consider the Amazon Fire Stick, which is only $39. It doesn’t have all the same content Roku does, but you may not care. I haven’t actually tried it out, but my brother loves his. (However, I don’t recommend the Google Chromecast for Apple-centric people.)

One thing the Roku does not have compared with the Apple TV is AirPlay and iTunes Store content. I haven’t missed those, really, since most of what I used AirPlay for was Amazon Instant Video, which is available as a Roku channel; and I don’t buy much from the iTunes Store, as I prefer subscription services to a la carte video. With the new Apple TV’s new app capabilities, Amazon and Google could provide their content if they want to, but until they do, the Roku will still have a place on my TV cabinet.

Streaming movies: Where do you find them?

Sonos and AirPlay for Music at Home