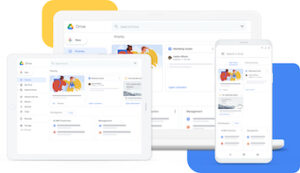 There are a ton of cloud storage providers at this point: Dropbox, Microsoft OneDrive, Apple iCloud Drive, Google Drive, and more.

Google Drive has been gradually displacing Dropbox over many years as the cloud drive of choice for those who need to share documents, and who are not embedded in Microsoft’s world.

While it’s possible to use Google Drive entirely on the web, and my guess is that it’s what most people do, a much more pleasant experience, in my opinion, is to install software on your computer that makes your Google Drive appear as though it is any other folder on your computer. You can just save items into it and copy items out of it directly without uploading or download, by using the Finder or another Mac application. This is, of course, the way Dropbox and iCloud Drive are typically used. (If you open a document from the Finder that was created with Google Docs, it will open in your web browser, since there is no dedicated Mac application for it.)

To date, using Google Drive software on a Mac (or Windows PC, for that matter) has been confusing, because there are two entirely different pieces of software that provide your files. It’s Google. Are you surprised? This is all about to change, but right now, these are:

It’s actually possible to install both Backup and Sync from Google and Google Drive File Stream, and there are some use cases for it (such as wanting to access files in two different Google Drives). Signing into the same account with both does work, though Google discourages it. I did this for a little while when I wanted to have some folders always downloaded and available, and the others visible in the Finder without taking up space on my drive. I eventually gave up on both and switched to Dropbox, because it has, in my experience, more reliable synchronization, and both Smart Sync and selective sync capabilities under one roof.

What’s being added to the existing Google Drive File Stream is the “backup” part of Backup and Sync from Google, which keeps copies of what’s on your desktop, documents folder, and photos. I always disable those features; Google has enough of my life without also having the entirety of my computer, and I don’t know that I trust their technology more than I do more comprehensive, dedicated backup solutions like Backblaze.

What’s being taken away is the “Selective Sync” feature of Backup and Sync from Google, and probably the ability to have everything downloaded to your computer all the time, if I’m reading between the lines correctly. This might not affect that many people, but if either feature is something you use, you might need to adjust your habits, or switch to a service that offers equivalent behavior, like Dropbox.