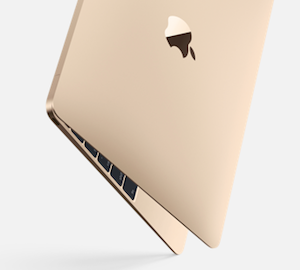 If I may offer a bit of analysis:

Over the last several years, Apple has had fairly understandable product naming. “MacBook” was the entry level model, “MacBook Air” was the small-and-light model, “MacBook Pro” was the expensive, powerful model. One of Steve Jobs’ significant acts upon returning to Apple was the simplification of the then-convoluted product line; and probably the most noteworthy change since his departure has been an erosion of that simplicity. This isn’t to fault, in any way, the quality of Apple’s products, which are higher than they have ever been; however, it’s more challenging for customers to choose among them.

The hardest buying decisions come when having to critically evaluate tradeoffs between different models in different product lines, and it’s even harder when the names of those lines change their previous meaning, or lose it entirely. The “Air” name had already lost clarity when it was given to the top-of-the-line 5th generation iPad, larger and heavier than the iPad Mini. With yesterday’s introduction of the MacBook, the situation becomes more confusing still, as the MacBook Air now represents a midpoint between the MacBook (smallest and lightest) and the MacBook Pro (most powerful). Apple might have retained some consistency had they called it “MacBook Mini,” or “MacBook Air with Retina Display”, but naming consistency doesn’t seem to be where they’re at.

And the product lines now have competing features. Rather than having each product represent a superset of capabilities over another one, customers now have to decide, for example, whether they want a lightweight model with multiple USB ports, or an even more lightweight model with a Retina display. As a power user who has always flocked to Apple’s smallest and lightest computers, even I don’t know how to make that decision, and am indeed torn as to whether I want to replace my beloved MacBook Air 11” with the new MacBook. If Apple is the technology company that makes technology friendlier, simpler, and easier to understand, they’d do well to clarify the distinctions between product lines in a way that is friendlier, simpler, and easier to understand.

IvanExpert in the news, talking security