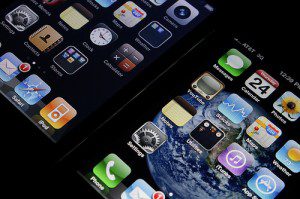 Early reviews say the Retina display, as Apple calls it, is a wonder to behold, displaying text with print-like quality. Apple claims it is the highest resolution display on a phone. Is it true?

Let’s get our terms straight — while “display resolution” sounds like it should describe how sharp an image is, it doesn’t. It actually has come to mean the total number of pixels on the screen, expressed as horizontal by vertical, regardless of the screen size. For example, the screen on the iPhone 3G has a display resolution of 480×320, my MacBook’s is 1280×800, and my TV’s is 1920×1080.

Sharpness is measured by “pixel density,” measured by pixels per inch (ppi). Computer displays are typically around 100 ppi, while phones come in a huge range.

Finally, “screen size” is the diagonal measurement from one corner of a screen to its opposite. This is annoying, because you can’t reliably compare two measurements, because the ratio of the short side to the long side varies between models and manufacturers. What you really want to know is the long side by the short side, as with resolution.

Anyway, the iPhone 4’s sharpness comes from Apple having packed a lot of pixels into a very small space. Its resolution is 960×640 on a 3.5″ screen, yielding a pixel density of 326 pixels per inch — slightly more than the first laser printers, and double the iPhone 3GS.

But then I was thinking: the BlackBerry Curve 8900, which I am still using despite being incredibly bored with it, must also have a very high pixel density, because it has a few more pixels than the iPhone 3GS does, but on a much smaller screen. And the the display really is incredibly sharp. So I brushed up on the Pythagorean Theorem, and calculated that its screen is 246 ppi — falling right in between the iPhone 3GS (163 ppi) and 4G. But, of course, the screen is smaller.

What about other phones? A cursory survey suggests the iPhone 4G is the king of the roost for both resolution and pixel density, for the moment. The next highest resolution phone is the new Motorola Droid X, at 854×480; but, with its 4.3″ screen, it is notably less sharp at 217 ppi. As far as pixel density goes, the Sony Ericsson X1 is close to the 4G at 312 ppi, with a 800×480 display on a 3.0″ screen. (Whether a smaller, sharper screen is better than a larger one with a similar number of pixels is surely a matter of preference.)