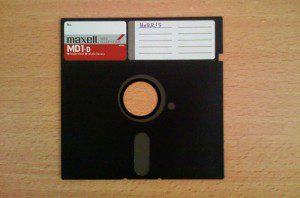 I’ve got a box, filled with 5.25″ floppy disks. (If you’re too young to know what those are, ask your dad.) I mean, there are probably 300 in there. Most of them are for the Apple II computer, which is what I primarily used from 1978 through 1990, and which, despite being an Apple, is not in any way a Mac. There are also disks for old IBM PC’s, a Kaypro 4 (bonus points if you know what that is), and who knows what else.

It’s time to excavate and salvage. Buried in these disks, in addition to some truly excellent (if primitive) games, are many creative works: papers, writings, programs I wrote, etc. If these were paper, I’d probably put them in a box and put them into storage and be done with it. But that’s not an option; these disks were never designed to store data for 25 years. Many have probably already failed, whether due to the magnetic patterns representing the data getting scrambled, or mold growing on the disc, or general entropy.

This is not real easy. There’s basically three hurdles: 1) reading the disks at all, 2) getting them on to something modern computers can read, and 3) getting those files to be usable on a modern computer. This is a pretty common problem — lots of people and companies have 5.25″ and 3.5″ floppy disks in weird formats they don’t know what to do with.

So it’s time to bust out my 1983 Apple //e — I think the last time current flowed through its electronic veins was 1994 — and get disking. The plan right now looks like I will copy the disks to a flash memory card like those in a camera; this is possible because a few years ago, a hobbyist actually developed an accessory for the Apple II which lets it read flash memory cards, and so of course I bought one, in anticipation of this day. I’ve also got an unusual older Mac which is one of the few which can use Apple II software, so I might be able to copy the disks to that, and then from there to a newer Mac via network. But even connecting an older Mac to a newer one on a network is a challenge. The kind of challenge I like.

I’m pretty excited about it. It will be like seeing old friends. Friends made of bits. I’m not a computer person or anything.