Greetings to one and all! We’re here with the latest news from Apple, following their special event Tuesday. They announced a bunch of stuff. 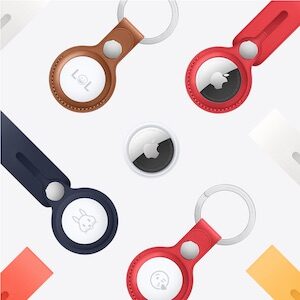 Let’s start off with an entirely new product! Apple is extending their Find My technology (which you can use to locate your iPhone) to all of the small items in your home, such as your keys, your remote controls, your favorite bottle opener, you name it. You affix an Apple AirTag — a small disc vaguely resembling a watch battery or coin — to the frequently-misplaced item in question, go to the Find My feature of your iPhone, et voilà, you and your mislaid object are reunited. (Tile cannot be happy about this.) The real miracle is that if you have, say, a bag with an AirTag attached, and you leave it in a park, anyone’s iPhone that might be passing nearby is capable of transparently and anonymously reporting your lost bag’s location to Apple, so you can locate it using Find My. You might not be the losing-things type, but AirTags were made just for me. AirTag batteries last about a year, and you can replace them yourself. Each AirTag is $29, or $99 for a four-pack, on sale April 23 and shipping April 30. 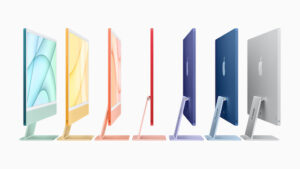 Apple’s stalwart all-in-one desktop computer received its first significant design makeover in 14 years, with new innards reflecting Apple’s two-year product transition to Apple-made processors that they began five months ago. The new iMac is almost absurdly slim, like a gigantic iPad on a stand, and comes in 6 cheery colors in addition to the staid silver. Despite its svelte contours, Apple claims the machine has awesome sound, awesome microphones, and an excellent web camera.

On the inside, the new iMac uses Apple’s homegrown M1 processor — the same as that inside last November’s revamped MacBook Air, entry-price MacBook Pro, and entry-price Mac mini. Apple is now selling essentially the same machine in four different shapes and sizes, and you can expect them to perform similarly to one another.

The new iMac has a 24-inch “4.5K” screen, but reduced bezels (edges around the actual display) make it not much physically larger than the previous 21.5″ 4K model. The keyboard offers Touch ID, like Apple’s laptops — hooray. The headphone port has been happily moved from the rear to the side. The back has been pared down, offering two 40 Gbps USB4/Thunderbolt 3 ports, and two 10 Gbps USB 3 ports; all have USB-C connectors.The Ethernet port has been moved, interestingly, to the power brick. There is no camera card reader slot.

The redesigned iMac starts at $1,499, increasing in price with more memory and storage. There is also a $1,299 entry model (available in only some colors), which has a marginally less capable processor, omits the two 10 Gbps USB 3 ports, and makes the Ethernet port and Touch ID fingerprint reader into additional-cost options. All models will be available for purchase on April 30, and will ship “in the second half of May.”

The existing Intel based 27-inch iMac remains for sale, and it still offers “pro” type options (such as large memory and storage) not available on the new iMac. That suggests that a higher-end, larger model Apple processor iMac will be released sometime over the next 18 months. The 27-inch iMac is still a fine machine, but it’s hard to recommend buying an Intel based Mac at this point; it’s the end of an era, with soon to be obsolete technology, and Apple will treat it as such. Only get one if you need something it offers that you can’t wait for, or you need to run software for Microsoft Windows, which can’t be done on Apple processor Macs. (The very long in the tooth 21.5″ model also remains available for sale, but has been removed from prominence on Apple’s website, and I won’t be surprised if it is discontinued shortly.)

It’s exciting to see an all-new iMac after so long, and if you’ve been holding out, you’ve now got your machine. In colors! 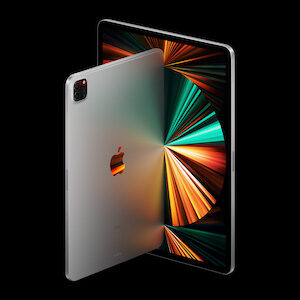 Apple updated its iPad Pro models, keeping the same 11-inch and 12.9-inch sizes. The new iPads are powered by the very same M1 chip that the new iMac is, meaning the main thing distinguishing a Mac from an iPad at this point is the operating system and touch screen — under the hood, they’ve both got the same powerful engine. That brings to the iPad a USB4/Thunderbolt port, and the same memory and storage capabilities as Macs, edging the iPad ever closer to traditional computer territory.

The 12.9-inch model features similar display technology (which Apple calls “Liquid Retina XDR”) that Apple offers in their $6,000 professional monitor, which yields more brightness, contrast, and richness of color. A cool new feature that both models have is an ultrawide front camera that can keep you centered during a FaceTime call even as you move around your home.

Both models can be used with previous iPad Pro accessories such as the Pencil and Magic Keyboard (the latter now available in white), which turns the iPad into a kind of laptop. They also support 5G cellular networks, for faster internet when not on Wi-Fi.

If you’ve already got a recent iPad Pro, or the latest iPad Air, the new models may or may not feel like an improvement. If you’ve got anything older, or have a lower-end iPad, the new iPad Pro should feel like a meaningful upgrade. The 11-inch model starts at $799, and the 12.9-inch model starts at $1,099; the lower-storage configurations come with 8 GB of memory, and the high-storage options (1 TB and 2 TB) come with 16 GB of memory. You can order on April 30th, and they ship “in the second half of May.” 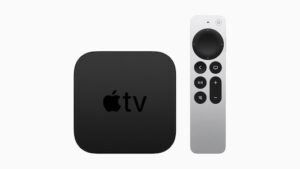 Apple came out with a new version of their streaming box which hadn’t been updated in four years. The changes are not going to rock your world unless you have a state of the art television. The new version does what the previous model did, but it supports the latest TV display tech, such as HDR and high frame rates. It also has a slick feature that provides optimal color calibration for your TV, via your iPhone, with minimal effort.

Apple also substantially improved the remote control, replacing the touchpad with a hybrid of touch and directional buttons; and they happily moved the Siri button off the front face to the side, and added mute and power buttons.

What’s surprising is that there is no apparent support for the spatial audio capabilities of AirPods Pro and Max. Also surprising, and disappointing, is that AirTag technology isn’t built into the remote control, when that’s an item you’re frequently likely to misplace. You could, of course, stick on an AirTag, but that doesn’t offer much Apple-style elegance.

The new 6th generation Apple TV box (still named, confusingly, Apple TV 4K) continues to be mysteriously sold in two configurations at $179, and $199; the latter probably isn’t necessary unless you install a ton of channels, but what’s another $20 when it’s already several times the cost of competing boxes? If you’ve already got the most recent Apple TV, there’s probably no reason to buy this one unless you’ve got a brand new high end television that you want to make the most of. If you don’t have a 4K television and your existing older Apple TV box is doing everything you want it to, there’s no burning reason to replace that, either. But if you want the new remote control for your existing Apple TV, you can have it for $59. You can also buy the 4th generation Apple TV, aka Apple TV HD, with the new remote, for $149; but for $30 more I’d probably just recommend getting the new one for the eventual day you get a 4K television. The new Apple TV goes on sale April 30, and ships “in the second half of May.” 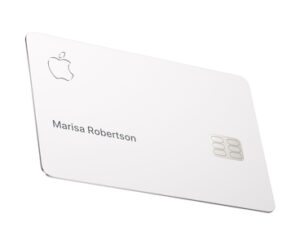 Apple’s own credit card, whose chief features are virtual use via Apple Pay and user-friendly personal finance analysis on your iPhone, adds something novel to credit cards: the concept of shared family credit. If both heads of household each have an Apple Card, that credit line can now be pooled, and the lower interest rate will be used. You can also now share your Apple Card with family members 13 and up, with optional limits (almost like employees on a small business credit card). As both an Apple fan and a credit card rewards enthusiast, I was always a little underwhelmed by Apple Card, so I like seeing some actual innovation with it. 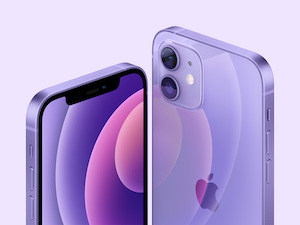 If you have any questions about any of Apple’s new products, please ask us!