Greetings fellow Mac people. We bring you the latest news from Apple.

But first: IMPORTANT: If you’ve got an iPhone, iPad, or iPod Touch, update right now to iOS 14.8, which fixes critical security issues. If you’re already on iOS 14, you won’t notice any difference. You will only be able to perform this update until September 19; after that, you’ll instead be forced to update to iOS 15, which may or may not be ready for prime time, and may be disruptive to your workflow by changing things around. If iOS 15 turns out to be great, you can always update from 14.8 to 15 later, but in the meantime, perform the update. I recommend you check that you have a recent iCloud backup before updating, which you can do under Settings > (your name) > iCloud > Backup. Tap on that, and you’ll see the most recent backup date.

And next: Should you update to macOS Big Sur, if you haven’t yet? At this point, the answer is yes. Just make sure you have a full Time Machine or Carbon Copy Cloner backup first, and ask us if you have any questions. (If your Mac cannot support Big Sur, and you are only eligible for Catalina, and are not yet on it, then you can install that instead; and you should probably start thinking about a new Mac.)

Ok, on to yesterday’s Apple announcements: 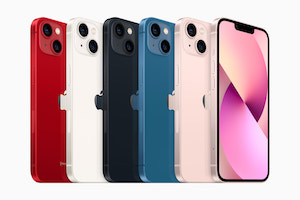 iPhone 13 (mini/standard/Pro/Pro Max): The latest iPhone has the styling of the iPhone 12, but it’s faster, with longer battery life, a better camera, 128 GB minimum storage, a smaller “notch” intrusion on the screen, and more worldwide 5G support. As before, the Pro and Pro Max models also offer a zoom lens and other camera niceties, and add ultra smooth “ProMotion” scrolling, and a new 1 TB maximum storage option. The prices are the same: the 13 mini (like a 13 regular, but with a small screen) starts at $699; the 13 regular starts at $799; the Pro starts at $999, and the Pro Max (like a 13 Pro, but with an extra large screen), starts at $1,099. If you prefer a small, yet high-end, iPhone, the 13 mini is rumored to be the last one of its kind, as the 12 mini didn’t sell well (small iPhone buyers instead seemed to prefer the considerably cheaper iPhone SE). The iPhone 13 models go on pre-order sale on September 17 at 8 AM ET, and become available September 24. 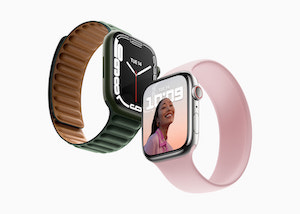 Apple Watch 7: A bigger screen that allows for a full keyboard on your Apple Watch is probably the most exciting news here. Otherwise, it’s a mild redesign, made of more durable materials, according to Apple, so it’s less breakable. And the Watch 7 has a brighter “always on” display so you can see what time it is without jerking your wrist. It does not appear to offer new health monitoring doodads relative to the 6. Watch 7 is not for sale yet; when it is in “the fall,” it will start at $399, and the more affordable Watch SE (a 6 with fewer features) will remain available for $279, and the hard-to-recommend-because-it’s-so-old Watch 3 will also remain available at $199. For the time being, you can still buy a Watch 6, but I’d probably just wait for the 7. 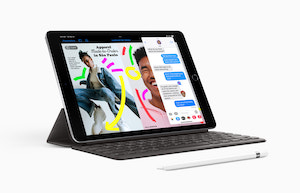 iPad: I’ve long been of the opinion that, at $329, the plain-old-iPad represents one of Apple’s very best values. It just quietly does everything you might want an iPad to do, at a minimum price. The ninth-generation model they’re releasing has faster performance and twice the minimum storage (64 GB). You can order it now, and it ships September 24. 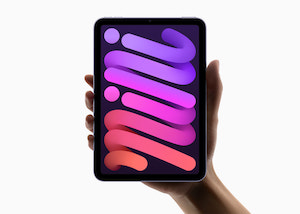 iPad mini: Unlike the regular iPad, which has kept its same longstanding appearance for a decade, the iPad mini now has a new higher-end design, with slimmer borders around the screen, a magnetic attachment for the Apple Pencil 2, a much faster processor, and 5G cellular network support. Accordingly, its price has jumped to $499. The iPad mini is now better thought of as a smaller version of the iPad Air, which itself can be thought of as the low end of the iPad Pro line. There is much in common with the Air, such as a USB-C port replacing the lightning port (hurrah), and the power button doing double duty as the Touch ID sensor. The new iPad mini is available for order now, and becomes available September 24. (Apple has not elected to keep selling the previous iPad mini as the “cheap” option, as they have with their phones, though it would have been nice, in this case, if they had.)

Apple is expected to have more announcements about high-end MacBook Pro models, next-gen AirPods, and more, before the end of the year, so we will keep you posted when they do. As always, let us know if we can answer any questions for you!