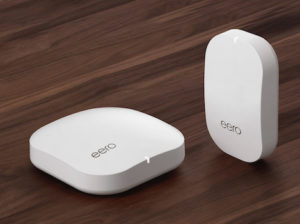 Mesh WiFi has been a tremendous development for easily spreading WiFi around a larger home or office. It’s self-configuring repeating–you just drop your additional units in and the system figures out what to do.

We’ve tried a few, and they mostly do what they’re supposed to, including Linksys Velop, Netgear Orbi, Google WiFi, and Plume.

But the one we like best is Eero (which recently was acquired by Amazon, for better or worse). It’s elegant, it’s simple, it’s flexible, and it works. One of the things I like most about it is that it can support any combination of wireless and wired units, and is just as happy to operate in either router or bridge mode in all configurations.

Various products each have their strengths and weaknesses. Google WiFi doesn’t let you use bridge mode with a multi-unit mesh setup; Netgear Orbi prefers a “star” configuration with it at the center; Linksys Velop seems solid but its app lacks easy configuration (and you can never change the email address you use to manage the account); Plume has an ongoing subscription requirement, and its smaller units (Pods, rather than SuperPods) don’t have that much range–you’re supposed to put one in each room.

But Eero pretty much just gets it done. It doesn’t have the robust monitoring that Google WiFi does, and it doesn’t have the “adaptive” smarts that Plume has, but it’s a snap to set up using a mobile app, and it solidly provides wireless throughout your home, especially if you opt for the full size Eero units, rather than the smaller Eero Beacon units.

One thing that’s nice about Eero (and perhaps others) is that you can easily use it as a no-configuration wireless-to-wired bridge. I recently set up a client’s home office, and the room he was in did not have wired Ethernet. He needed it, though, for a VPN hardware product and VoIP phone. All of the Eeros in his house were connected by wire, so I just took an unused one, added it to the network as a wireless unit, and his VPN and phone instantly got use of its Ethernet ports, no muss, no fuss.

Mesh WiFi can do a lot for you.

Use a Time Capsule without attaching it to a router