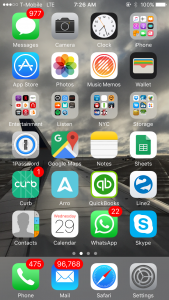 I’ve got a ton of apps on my iPhone, and even though I don’t need most of them all that often, some I need all the time. Everyone’s going to have a different approach to how they organize their iPhone, but I thought I’d share mine, in case it offers any ideas.

It all comes down to priority. The single most important apps — the ones I need to get to all the time, no matter what — occupy the bottom four spots, which are available on every screen. For me, these are Phone, Mail, Safari, and Settings.

(Settings is not going to be an obvious choice for most. I need to get in there regularly, though, because it’s where the options for Personal Hotspot, VPN, and Low Power Mode are found, and I enable each of those all the time.)

I have only three screens of apps on my iPhone. That’s all I can handle. But I use lots of folders.

The first screen — the one you can get back to by pressing the home button if you’re on another screen — has my everyday apps that I want to get to quickly. Most of my daily communications apps are here, such as Messages, WhatsApp, Skype, and Line2. I take taxis all the time, so I also have Curb and Arro, which let me set up payment before the ride concludes. Other key apps are Clock, Wallet (need to be able to get to that boarding pass quickly), and Camera.

Then come folders. Some people prefer themed screens of icons, but that’s not how I roll. Creating a folder is easy — you just rest your finger on any app to put the screen into “wiggle mode,” then you drag one app on top of another. A folder will be created, and you can give it an appropriate name. Apps can be added that folder it the same way — drag an app on top of it while in wiggle mode. And folders can contain multiple screens themselves, so you can put as much as you want in there; I prioritize the more important apps on the first folder screen. (You can’t put a folder inside another folder.)

My most important folders go into the remaining spots on my first screen, and the rest go onto the second and third screens. What goes into a folder is subjective, of course. I like to collect all of my less-used apps that come with the iPhone in their own folder; then I have folders for apps related to Movies, Music, New York City, Travel, Food, Social Media, and more. There’s no right or wrong way to do this — I just do what makes sense to me, so I can spend as little time opening an app as possible. My third screen contains a few less important folders that didn’t fit on the second screen, and also serves as a holding area for apps I have recently downloaded and want to check out, or haven’t yet put into a folder. So, it contains a small hodgepodge that I periodically go through, and either delete apps, or put them in folders. Or I just leave them there, if I don’t feel like thinking about it. Of course, I always have the options of searching for an app with Spotlight, if I can’t remember where I put it. But I think that’s clumsy and slow, and they way I’ve got things set up, I rarely have to do it!