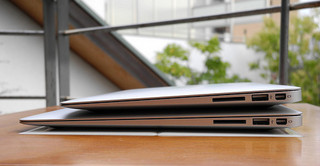 So you’ve got a new MacBook Air 2013 with the all-day battery and the superfast PCIe based SSD interface, and you want to clone over from your existing Mac that you used to love but now feels underwhelming.

And you wanna take advantage of the fact that, unlike other any other operating system I can think of, you can just use a tool like Carbon Copy Cloner to move the entirety of your old drive in your old computer to your new one without missing a beat. (Of course, you could also use Apple’s solution, which is migration assistant; this generally gets you to about 90-95% of how things were on the old machine, but not 100%. And sometimes it doesn’t work at all. So that’s why I like cloning the system as if it’s set up just the way you like it.)

Here’s the thing: even though the new Mac appears to be running OS X 10.8.4, it’s not the same build number as the standard version, because it came out after 10.8.4 was released. For example, the standard 10.8.4 build number is 12C60, while the special build for the new MacBook Air is 12E3200. Eventually, the new Mac will run a standard build (in this case, likely to be 10.8.5 or 10.8.6), but until then, how do you clone if the new Mac won’t run the old Mac’s build, and the old Mac won’t run the special build? The answer is: it’s not easy, and I wouldn’t really recommend it unless that’s what you really want, but if it is, you can do it.

If you can’t use Thunderbolt or FireWire to copy files between your Macs, follow the same basic procedure above, except instead of cloning directly to your new Mac from your old one, clone to a hard drive instead. When done, attach it to your new Mac, and at the step where you reinstall OS X, choose the the external drive rather than the internal HD. Once it’s done, it should start up booted from the external HD; at this point, use Carbon Copy Cloner to clone the entire drive, to the internal HD, using the Delete anything that doesn’t exist on the source option.

MacBook Pro or MacBook Air Is Slow to Wake Up? Here’s a Solution